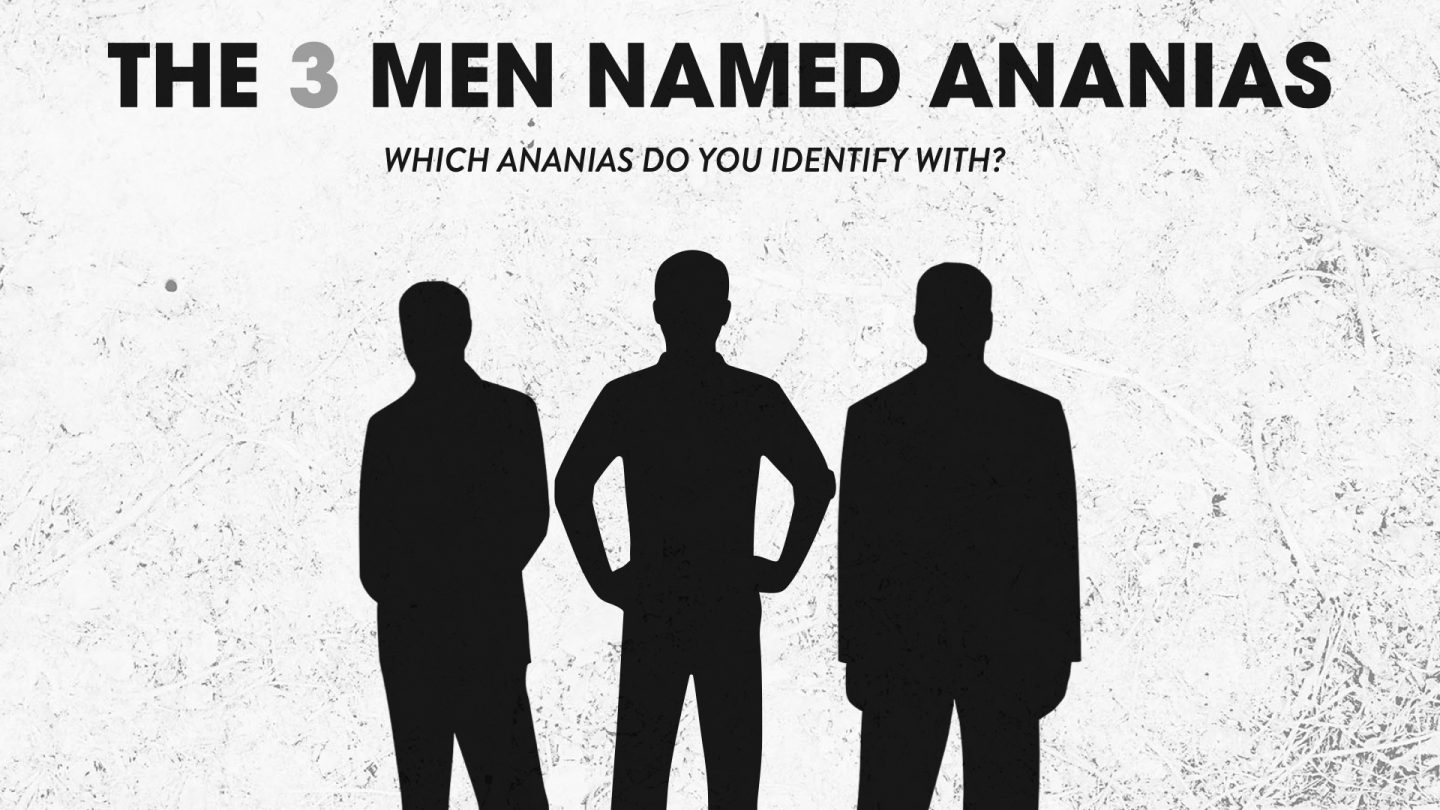 Have you ever heard someone utilize this generalization? It will start by them saying, “There are two types of people in the world”, and then they will proceed to compare competing views of the same subject. For example, there are those who make your life easier – and those who make your life harder. Or, there are those who live their lives to please man – and there are those who live their lives to please God. How about this generalization? There are those who eat baby back ribs with their fingers – and those who eat their baby back ribs with a fork. I’m ashamed to reveal that I identify with the latter. However, in the book of Acts, this is true as we find three men named Ananias who lived different lives. In fact, one could say that each of the three men named Ananias represents a different type of person today.

As we explore their situations, let us ask the question: Which Ananias do you identify with?

The first Ananias is featured in a dramatic episode that took place in the first century church in Jerusalem, in Acts 5. In the spirit of generosity, which was shared by most New Testament Christians (e.g., Acts 4:32), a man by the name of Ananias, along with his wife Sapphira, sold a parcel of land which they owned. However, the two conspired to lie about the profits they earned from this sell, not only to the apostles, but to God and the Holy Spirit. This incident was the first public sin recorded in the Jerusalem church and result in death for the married couple. This Ananias was dishonest and attempted to deceive God through lies. Do you identify with this Ananias?

The second Ananias played an integral role in the conversion of Saul. He lived in a city called Damascus, where Saul was sent by the Sanhedrin to arrest Christians. Both Ananias and Saul received divine instructions from the Lord. After Paul fasted and was blind for three days, Ananias came into the home and imparted divine instructions upon him. That is, what was required of him to be saved. Paul the Apostle would later recount this instruction before a blood thirsty mob, (e.g., Acts 22:16). This Ananias showed great resolve and courage through obedience by instructing a sinner in the plan of salvation, even though Saul was notorious for persecuting Christians. Do you identify with this Ananias?

The third Ananias was a High Priest in Jerusalem during the early portion of Paul’s ministry. He was a man known for his cruelty and presided over the trial of Paul, before the Sanhedrin Council, that is recorded in Acts 23. Infuriated with the defense of Paul, Ananias angrily instructed his subordinates to strike Paul in the mouth, (v. 1-2). He was a corrupt and hated man who, more than likely, was involved in a plot to murder Paul, (e.g., Acts 23:12-15). This Ananias was a man of great power, who had an even greater disdain for the gospel message and attempted to persecute those who identified with Christ. Do you identify with this Ananias?

In the book of Acts, we find three men named Ananias who lived very different lives. However, while two of those men had been corrupted by Satan, one of them remained resolved to do the will of God. Which Ananias do you identify with? I pray that each of us identify with Ananias of Damascus, a man who helped lead a devout persecutor of the church into becoming one of its staunchest defenders. What was the difference? Ananias of Damascus was sincere in his obedience to the commands of God.